Desert Gold’s initial Mineral Resource comprised pit constrained gold mineralization from five deposit areas all lying within a 12km radius of each other (Figure 1). A summary of the initial resources is presented below.

1. The effective date of the Mineral Resource Estimate is January 12, 2022.
2. Mineral Resources are reported in accordance with the CIM guidelines.
3. A marginal COG of 0.40 g/t Au for all material is applied.
4. Mineral Resources were estimated at a gold price of US$1,800/oz, mining cost including G&A at $11/t, mining costs ranging from $2.25 to $2,75/tonne, process recoveries of 92% and slope angles from 45 to 50 degrees
5. Figures have been rounded to an appropriate level of precision for the reporting of Mineral Resources
6. Due to rounding, some columns or rows might not add up exactly as shown.
7. The Mineral Resources are stated as dry tonnes. All figures are in metric tonnes.
8. The in-situ ounces are in troy ounces.

Desert Gold’s President & CEO Jared Scharf commented, “The publication of this initial Mineral Resource is a significant milestone for the Company and represents a great starting point. We believe, that with more drilling, the Company will be able to significantly expand on these resources and develop new resource areas like the Gourbassi North West discovery. We expect a busy 2022 as we work towards a 20,000 metre plus drill program with high expectations of the results.”

The Company has completed its recently announced drill program over the exciting new discovery at Gourbassi North West. 72 air core holes totalling 2,890 metres were completed along the 1.5km initial projected strike extent. Assay results are expected to be released in the coming weeks.

1. The effective date of the Mineral Resource Estimate is January 12, 2022.
2. Mineral Resources are reported in accordance with the CIM guidelines.
3. A marginal COG of 0.40 g/t Au for all material is applied.
4. Mineral Resources were estimated at a gold price of US$1,800/oz, mining cost including G&A at $11/t, mining costs ranging from $2.25 to $2,75/tonne, process recoveries of 92% and slope angles from 45 to 50 degrees
5. Figures have been rounded to an appropriate level of precision for the reporting of Mineral Resources
6. Due to rounding, some columns or rows might not add up exactly as shown.
7. The Mineral Resources are stated as dry tonnes. All figures are in metric tonnes.
8. The in-situ ounces are in troy ounces.

These resource numbers have been further subdivided into oxide, transition and fresh, with the bulk of the gold mineralization hosted in fresh rocks as per Table 3. Resource sensitivity to various grade cut-offs is presented below in Table 4. 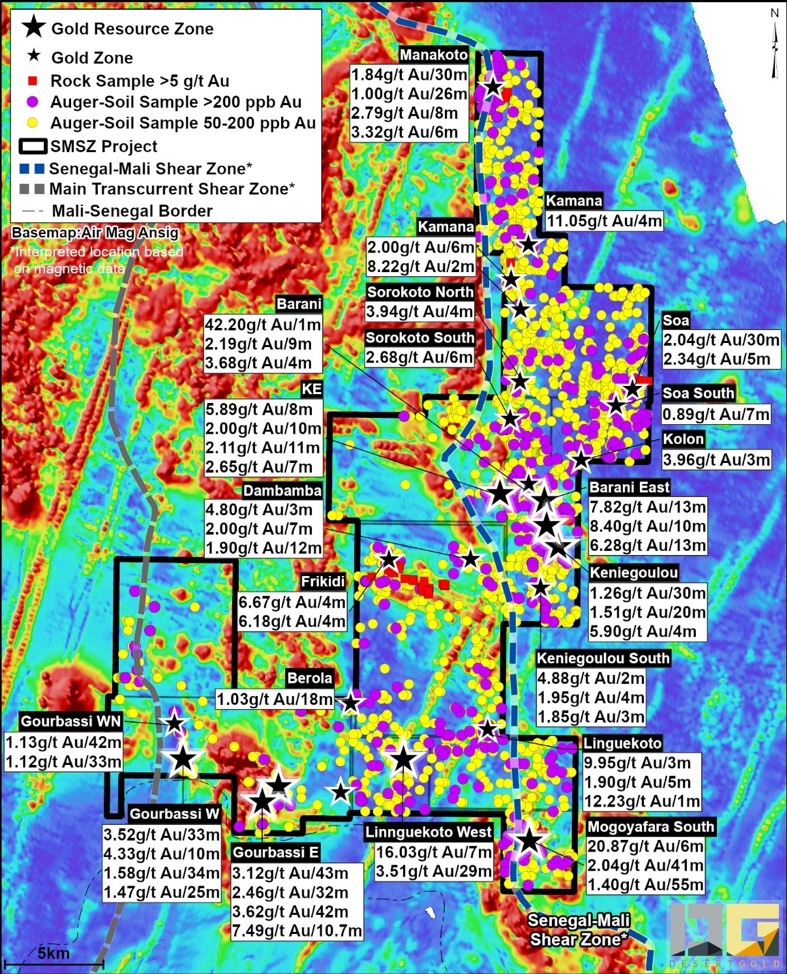 The resource totals 12.29 million tonnes grading 1.05 g/t gold for 412,800 ounces of gold. Modelling indicates that the zone is likely open to depth with additional lenses possible to the east and west.

This deposit, is hosted by, in order of abundance, quartzite, siltstone, conglomerate, felsic intrusions and mafic intrusions. Desert Gold has validated the location of 54 of the drill collars. The Mogoyafara South Zone lies just east of the interpreted location of the Senegal Mali Shear Zone. Anomalous rock samples and gold-in termite samples show potential to extend the zone to the south for another 1,200 metres. As well, gold-in-auger values shows the potential to extend the target area another 800 metres to the north. 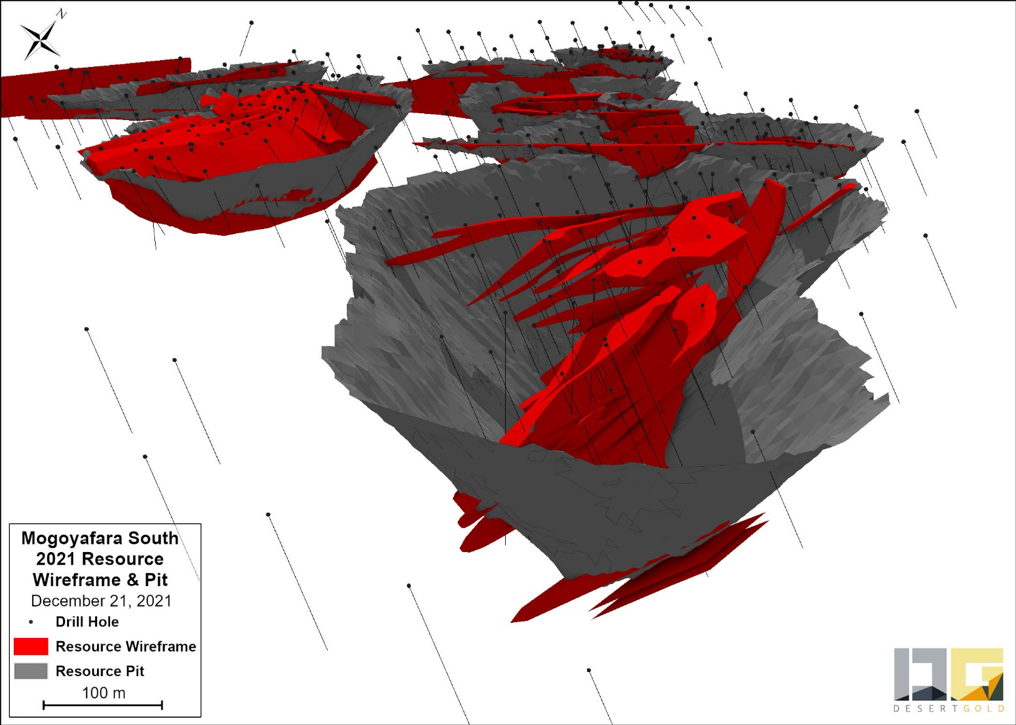 The Barani East zones comprise the Barani East, Barani Gap and Keniegoulou (as a group, referred to as Barani), which are all deemed to be part of one structural zone and the KE Zone, which lies to the northwest of the Barani East Zone. The Barani Zone, shown below in Figure 3, which was wire framed, was not added to the resource model due to uncertainties with the interpretation.

The Barani East lenses are interpreted as a curved mineralized structural feature, which varies from aligned semi-parallel to the Senegal Mali Shear Zone to parallel to a northeast-trending cross-structure. Mineralization along this structure can be traced for approximately 2,500 metres along strike and appears to be open both along strike and to depth. This group of deposits are hosted by a mixture of sandstone, siltstone, limestone and locally dolerite. Some of the best mineralized intercepts on the property, occur in the cross-cutting portion of the Barani East zone with intercepts to 6.28 g/t Au over 13 metres and 7.82 g/t Au over 13 metres.

The KE Zone lies on the western edge to the Barani area. It is a flat-lying, northerly-trending mineralized series of gold-bearing lenses with a best drill intercept of 5.89 g/t gold over 6 metres (approximately 5.5 metres true width). The zone has been intersected for 450 metres along strike, from 20 to 70 metres vertical depth and is locally 100 metres wide. It is open to both the north and the south. All drilling on this gold system was carried out by Hyundai. 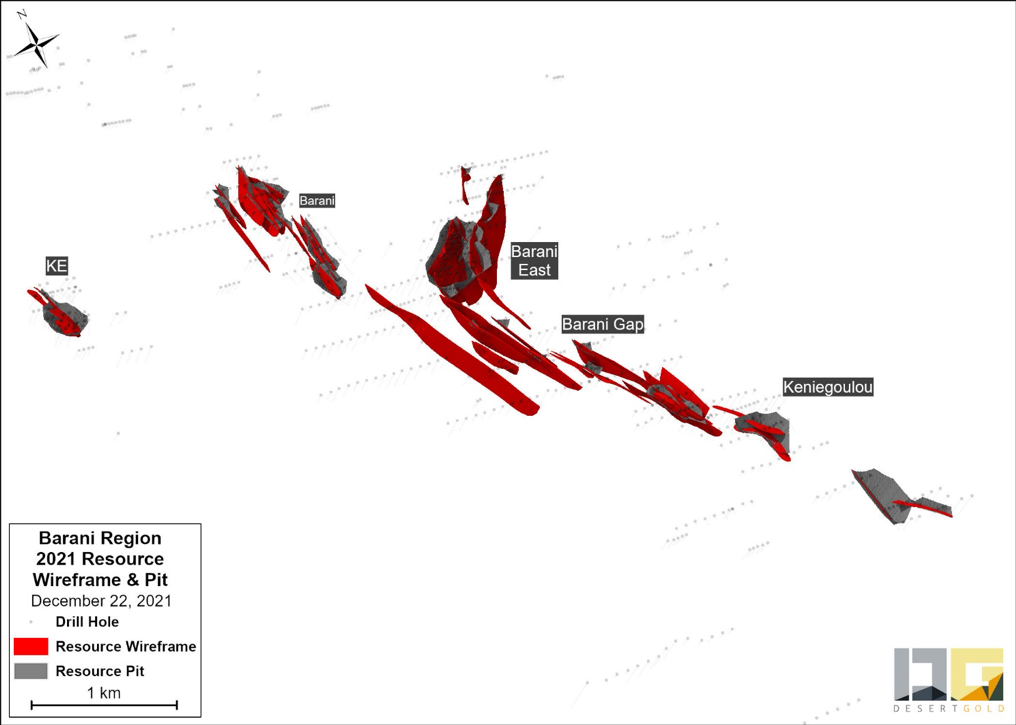 Drill holes have returned intercepts to 3.52 g/t gold over 33 metres (approximately 28 metres true width). Thicker mineralized zones appear to plunge shallowly to the north. The mineralized lenses are hosted by intermediate volcanic rocks, silicified hydrothermal breccias and quartz-rich sediments, immediately to the east of a major, north-northeast trending, likely structural, geological contact. Hydrothermal breccias are common in the Gourbassi West area and are often gold bearing. The hydrothermal breccias and siliceous, chert-like units continue intermittently for at least 1,100 metres to the north of the Gourbassi West Zone, where weak to moderate strength, gold-in-soil anomalies to 170 ppb gold, have been noted. Induced polarization (IP) resistivity high anomalies correlate quite well with the mineralized zones, which are generally silicified, sericitic and pyritic. 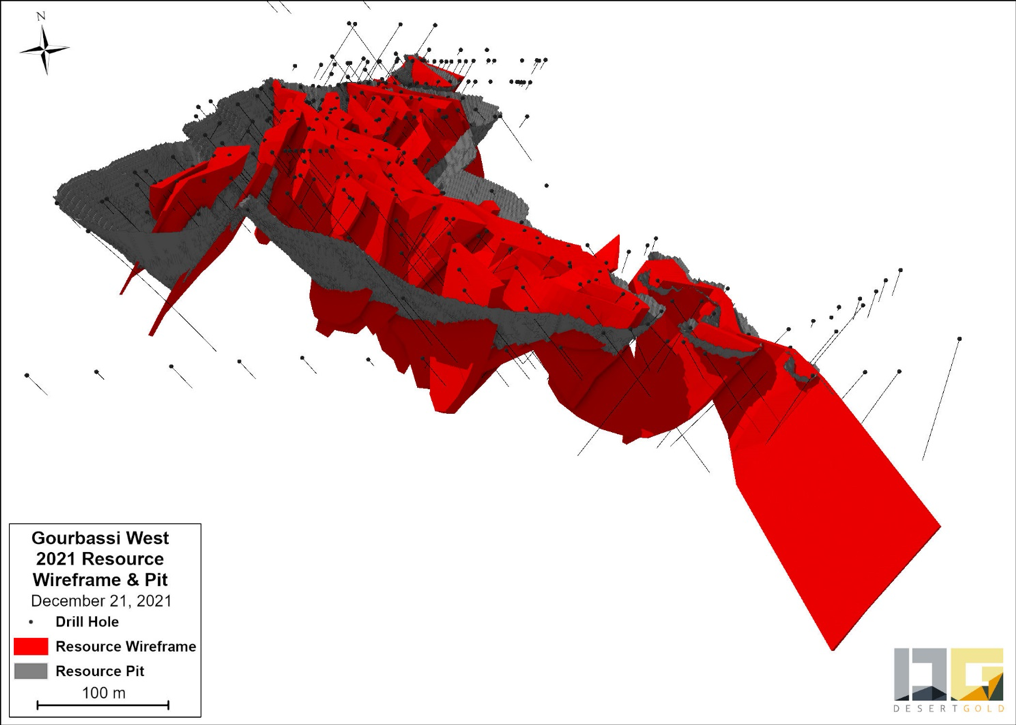 Felsic volcanics have been noted in the area, but, their relationship with the mineralized zones is uncertain. Magnetic and mapping data, indicates that the thickest part of the gold zone lies near a northerly-trending, shear zone contact with a northwesterly-trending magnetite iron formation. Induced polarization resistivity high anomalies, correlate quite well with the trend of the gold mineralized lenses. 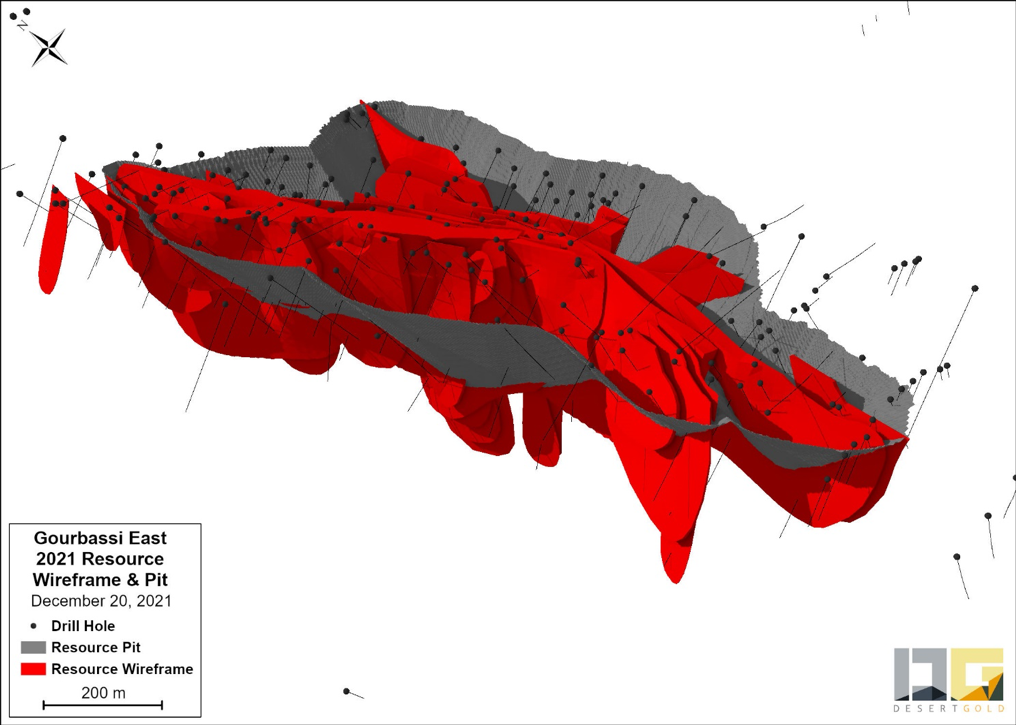 The Linnguekoto West Deposit lies on the Kolomba concession near the southern part of the SMSZ property.

The northwest-trending Linnguekoto West Zone lies immediately east of a northeast-trending mafic dyke that is related to the Barani East gold zone. This dyke is believed to occupy a shear zone that is locally gold-bearing that can be traced for approximately 25 kilometres as it passes through the property. Previous exploration at Linnguekoto West comprised 78 holes totalling 6,532 metres. This northeast-trending zone can be traced for 500 metres along strike (see Figure 6) with the deepest holes intersecting gold mineralization to approximately 140 metres vertical. Gold mineralization remains open to depth and along strike. Best fit modelling suggests a steep west dipping, generally higher grade, 1.5 to 7 metre wide gold bearing lens, that is both cut by and related to, up to six, shallow-east-dipping subordinate gold-bearing lenses with grades to 2.62 over 15 metres (estimated 14 metres true width). The steeply dipping lens has returned highlighted grades to 16.07 g/t Au over 7 metres (estimated true width of 4.0 metres), 7.78 g/t Au over 19 metres (estimated true width 4.9 metres) and 3.51 g/t Au over 29 metres (estimated true width of 8 metres).

While the Company has a complete drill database and have validated the location of several drill holes in the field, the location of the core/RC chips and original assay certificates is unknown. However, from the Company’s follow-up of other exploration prospects that Hyundai has worked on such as Barani East, the Company has high confidence in the quality and accuracy of the drill dataset. That said, drilling to validate the grades and interpretation of the interpreted gold-bearing lenses will still be required. 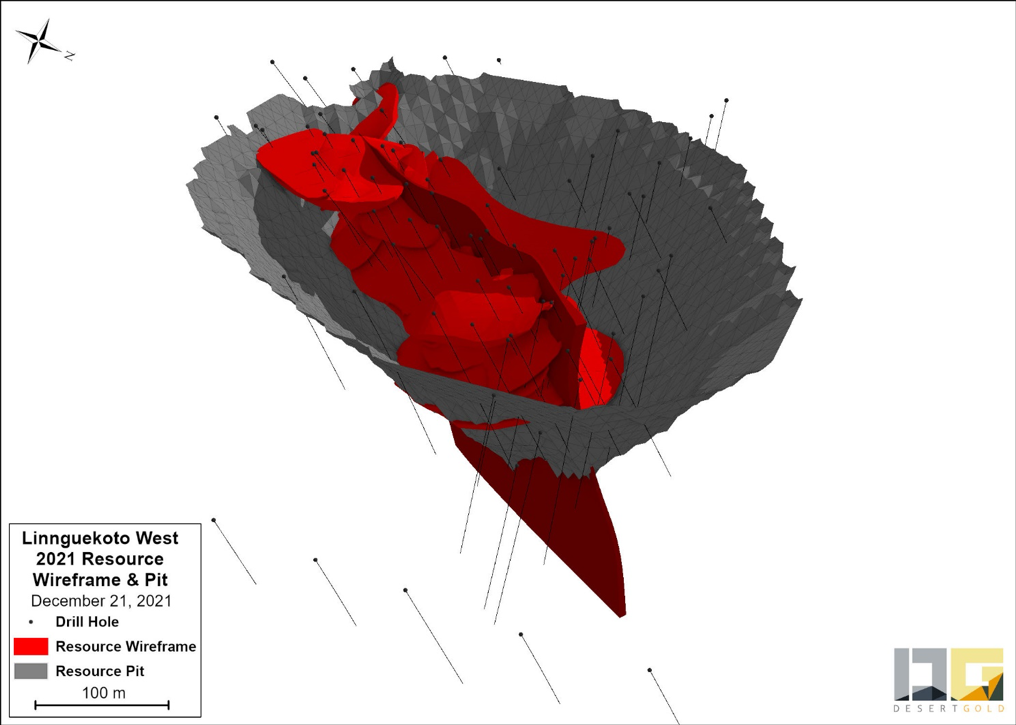 An additional, exploration program consisting of approximately 17,000 metres of drilling will be carried out subject to financing with work plans as follows.

Untested gold-in auger anomalies have been prioritized will be tested with a focus on anomalies >100 ppb gold.

Additional auger surveys are being contemplated in the Gourbassi West North and Mogoyafara areas.

All auger and drill samples are delivered to SGS in Bamako, Mali where they are prepped. The prepped samples, are both shipped by truck to SGS’s facility in Ouagadougou, Burkina Faso, or remain at SGS’s laboratory in Bamako, for Au determination by fire assay. Standards, assay blanks and sample duplicates, are inserted into the assay stream every 22 to 30 samples, respectively equaling one control sample for every approximately every 8 assay samples. All assay batches are reviewed for quality with re-assays requested 20 samples on either side of standards that assay more than 2 to 3 SD from an excepted value and for blanks that contain more than 10 ppb gold.

Certified Reference Materials and Blanks were inserted into the sample stream at the rate of 1:20 samples.  Field duplicates are collected at the rate of 1:50 samples.  All samples have been analyzed by SGS Laboratories in Bamako with standard preparation methods and 50g fire assay with atomic absorption finish.  SGS does their own introduction of QA/QC samples into the sample stream and reports them to Ashanti for double checking.  Higher grade samples are reanalyzed from pulp or reject material or both.

Desert Gold does not have any information regarding Hyundai’s QAQC procedures. However, based on follow-up of historic drill results in the Barani Area indicates an acceptable level of accuracy.

On Behalf of the Board

This news release contains forward-looking statements. These forward-looking statements entail various risks and uncertainties that could cause actual results to differ materially from those reflected in these forward-looking statements. Such statements are based on current expectations, are subject to a number of uncertainties and risks, and actual results may differ materially from those contained in such statements. These uncertainties and risks include, but are not limited to, the strength of the capital markets, the price of gold; operational, funding, liquidity risks, the degree to which Mineral Resource estimates are reflective of actual Mineral Resources, the degree to which factors which would make a mineral deposit commercially viable, and the risks and hazards associated with mining operations. Risks and uncertainties about the Company's business are more fully discussed in the company's disclosure materials filed with the securities regulatory authorities in Canada and available at www.sedar.com and readers are urged to read these materials. The Company assumes no obligation to update any forward-looking statement or to update the reasons why actual results could differ from such statements unless required by law. Neither the TSX Venture Exchange nor its regulation services provider (as that term is defined in the policies of the TSX Venture Exchange) accepts responsibility for the adequacy or accuracy of this release. This news release does not constitute an offer to sell or a solicitation of an offer to buy the securities described herein in the United States. The securities described herein have not been and will not be registered under the United States securities act of 1933, as amended, and may not be offered or sold in the United States or to the account or benefit of a U.S. person absent an exemption from the registration requirements of such act.

Contact
Jared Scharf, President and CEO
Email: This email address is being protected from spambots. You need JavaScript enabled to view it.
Tel. No.: +1 (858) 247-8195