Delta, British Columbia, February 1, 2018.  Desert Gold Ventures Inc. (“Desert Gold” or “the Company”)(TSX.V: DAU, FF: QXR2, OTC: DAUGF) is pleased to announce that it has concluded its previously announced drill program at Segala West. This program is a first step to further testing of the numerous mineralized structures and significant gold-in-soil anomalies that lie on the property.

As a first pass drilling, the program was designed to test continuity of gold mineralization reported from detailed mapping and rock sampling over five newly discovered artisanal zones including Baroya, Baroya North, Baroya North-West, Segala and Yatia West. The program was comprised of diamond, RC, and Aircore drilling.

A short drill program was conducted at Desert Gold’s Segala West property in November and December of 2017. 60 holes totalling 4,356 metres were drilled, including 3 core, 1 core/reverse circulation, 18 reverse circulation and 38 air core holes. The program was designed to test three newly discovered artisanal zones, Baroya, Baroya North and Yatia West and to test below a large artisanal open pit on the Segala West trend, where rock samples have returned up to 12 g/t gold over. Three core holes were drilled to provide structural information for three of the zones. The RC holes tested below the artisanal mining sites and the air core holes began testing the multitude of strong gold-in-soil targets and conceptual targets on the property. The Baroya NW zone, a recently discovered artisanal mining site, returned a RC drill intercepts of 0.92 g/t gold over 22 metres. This newly discovered zone is unique in the region in that the mineralization is associated with stockwork-type, primary-style hematite, sericite and perhaps albite altered sedimentary rock with no visible sulphides and limited amounts of quartz veining. Grab samples of this material have returned up to 39.2 g/t gold with visual gold. Because of the unique style of mineralization, samples have been sent out for mineralogical analysis and gold deportment studies. Additional holes are recommended to test this area and other areas that display stock-work type hematite alteration.

Two new gold zones were discovered while testing gold-in-soil anomalies with an air core drill. One of the new occurrences lies 800 metres north of the Baroya artisanal zone. This hole returned two intercepts including 0.5 g/t gold over 7 metres from surface and 0.99 g/t gold over 8 meters at 18 metres down hole. A second air core hole near another newly discovered artisanal zone, Yatia West returned two high grade intercepts of 7.16 g/t gold over 1 metre and 7.13 g/t gold over 1 metre. Follow-up drilling is warranted at both locations. In addition a parallel, northeast-trending structure that cuts a granitic body where a ‘Roxgold-type’ target has been generated still needs to be tested. The company will undertake an aircore program over this target later this year. 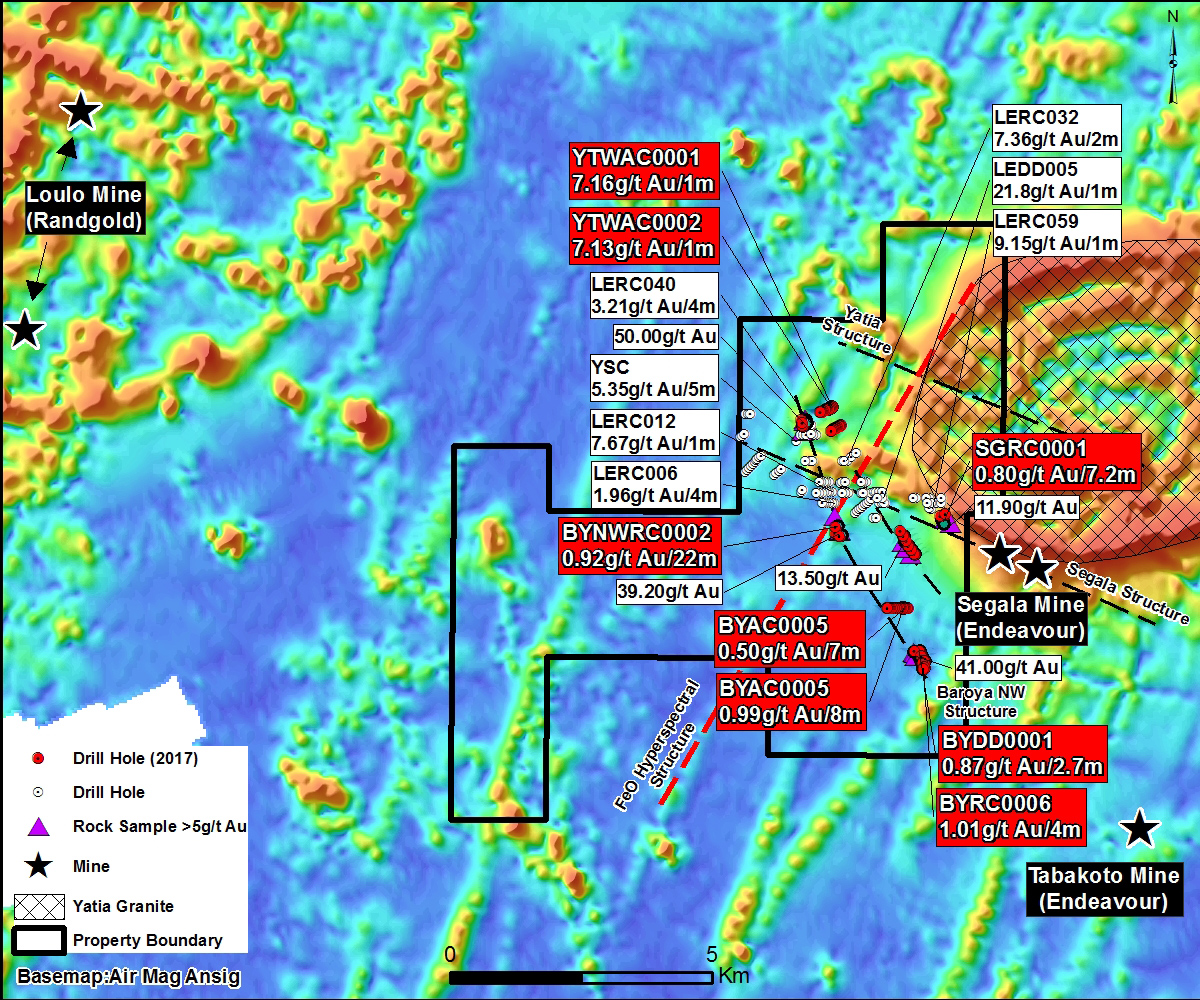 Drilling at the Segala West Zone extended the gold mineralization to depth, below a large artisanal mining pit with an intersection of 0.8 g/t gold over 7.2 metres. The Segala West Zone lies along trend of Endeavour’s currently mined Segala underground mine and the previously mined Segala Northwest open pit. Additional work needs to be done in this area to test this well mineralized structural trend.

Desert Gold's President Jared Scharf commented, "As a first pass drill program, our team is very pleased with these results. The program confirmed continuity of known zones and discovered several new zones confirming grab sample results from exploration work. A unique hematite-style mineralization has been discovered which we are only beginning to understand. These are challenging targets with mineralization often focused at structural intersections leading to the pinch and swell of the mineralized, gold-bearing lenses. We have learned a great deal from this short program where we are only beginning to understand the potential at Segala West. A great deal of follow up work is justified and we will aim to begin a second phase of drilling in Q2 of this year. In the meantime, our exploration team will continue its field work comprising of more geological mapping and prospecting to further refine our targets and improve our understanding of this property."

This note was reviewed by Dr. Luc Antoine who is a director of the Company and is registered as a Member of the Geological Society of South Africa (MGSSA 967397). He approves the scientific and technical disclosure in the news release and has the necessary experience relevant to the style of mineralization and types of deposits under consideration to qualify as a Qualified Person as defined in the National Instrument 43-101.

This news release contains forward-looking statements respecting the Company's ability to successfully complete the Offering. These forward-looking statements entail various risks and uncertainties that could cause actual results to differ materially from those reflected in these forward-looking statements. Such statements are based on current expectations, are subject to a number of uncertainties and risks, and actual results may differ materially from those contained in such statements, including the inability of the Company to successfully complete the Offering. These uncertainties and risks include, but are not limited to, the strength of the capital markets, the price of gold; operational, funding, and liquidity risks; the degree to which mineral resource estimates are reflective of actual mineral resources; and the degree to which factors which would make a mineral deposit commercially viable are present; the risks and hazards associated with mining operations. Risks and uncertainties about the Company's business are more fully discussed in the company's disclosure materials filed with the securities regulatory authorities in Canada and available at www.sedar.com and readers are urged to read these materials. The Company assumes no obligation to update any forward-looking statement or to update the reasons why actual results could differ from such statements unless required by law.