Delta, British Columbia, September 29, 2017, DESERT GOLD VENTURES INC. (“Desert Gold” or the “Company”) (TSX.V: DAU /FF: QXR2 /OTC: DAUGF) is pleased to announce that it has signed a drilling contract with Geodrill Ltd. The contract is for a total of 5,100 meters of drilling comprised of 1,500 meters of diamond drilling (“DD”) and 3,600 meters of reverse circulation drilling (“RC”). The program is scheduled to commence in the second half of October 2017 and will target The Company’s highly prospective Segala West permit; most notably 4 large artisanal mining operations in the southern area of the permit known as the Baroya area. The Segala West project is located within the Kenieba Inlier of western Mali. The permit is within a 20km radius of several large gold mines, including Randgold’s Loulo Gounkoto mine complex and Endeavour Mining’s Segala, Tabakoto and Kofi mines.

Axmin Inc. initially targeted interpreted cross cutting structures mostly in the northern area of the permit. Initial review and interpretation of this drilling showed localised shallow high-grade intercepts. In addition, several other soil anomalies remain unexplored within the Segala West permit. Several targets were poorly tested with limited RC and DD done by Axmin and TransAfrika Resources. This drilling focussed mostly on the northern part of the permit. However the southern area appears to be the most prospective with several on-going large artisanal mining operations that coincide with a robust soil anomaly of nearly 24km2. 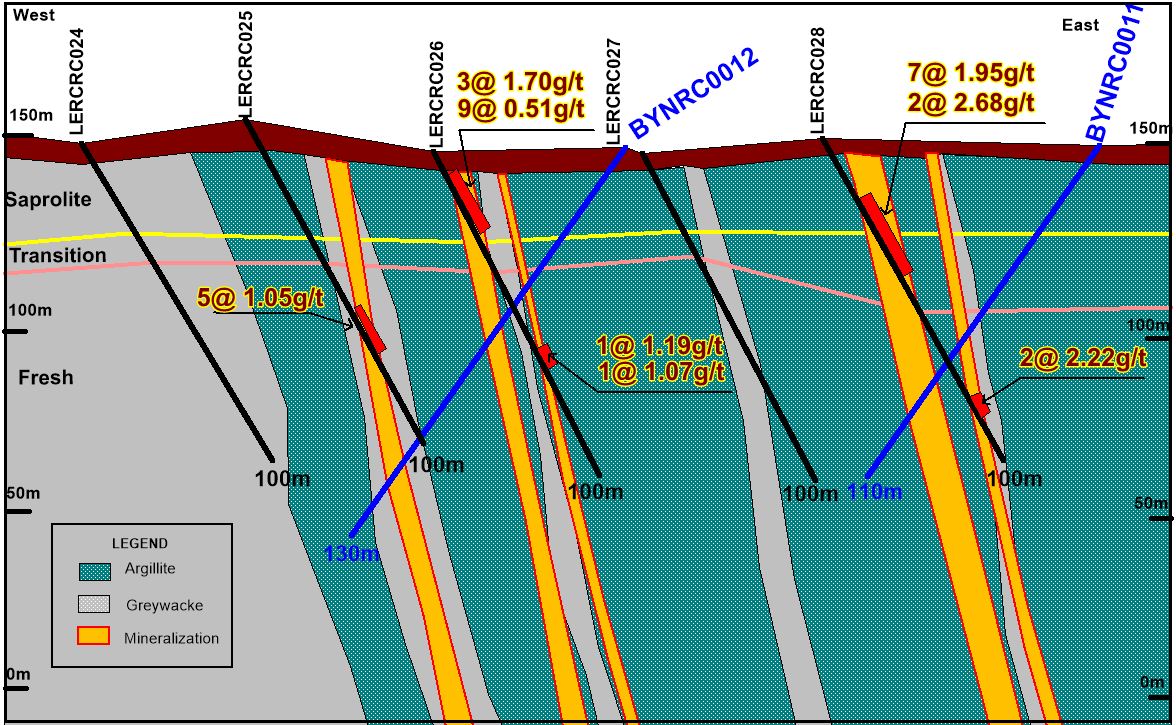 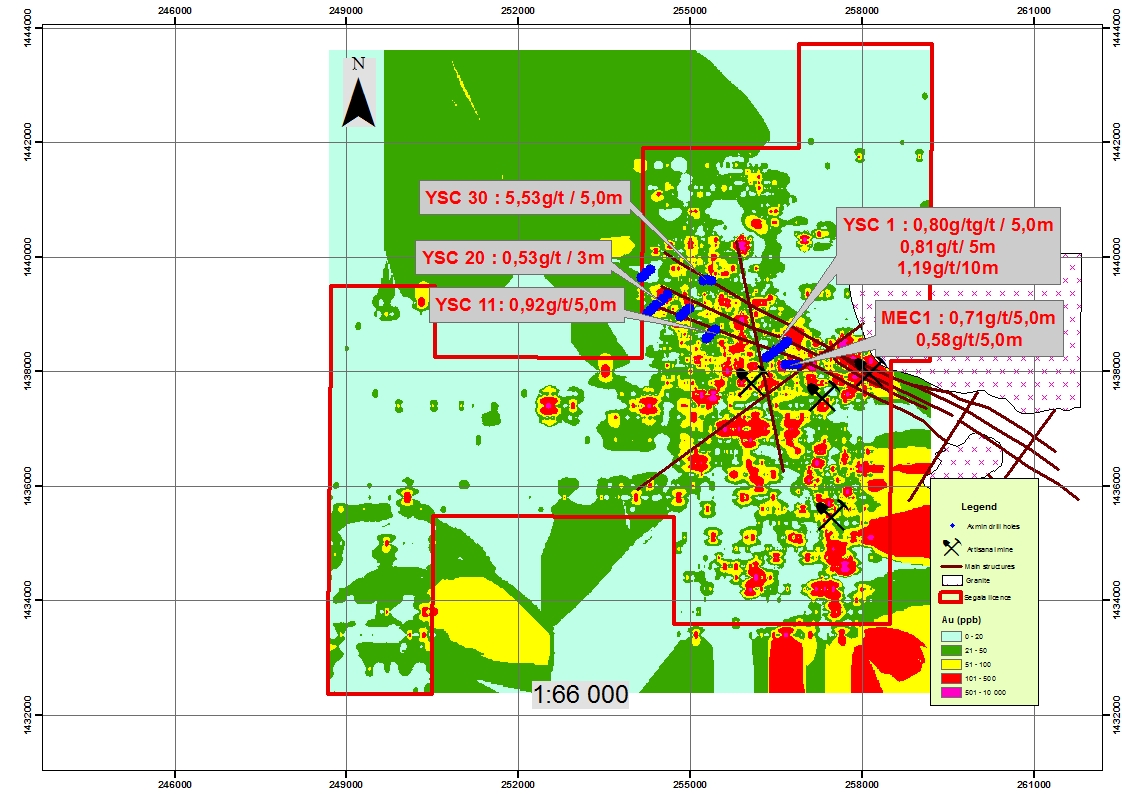 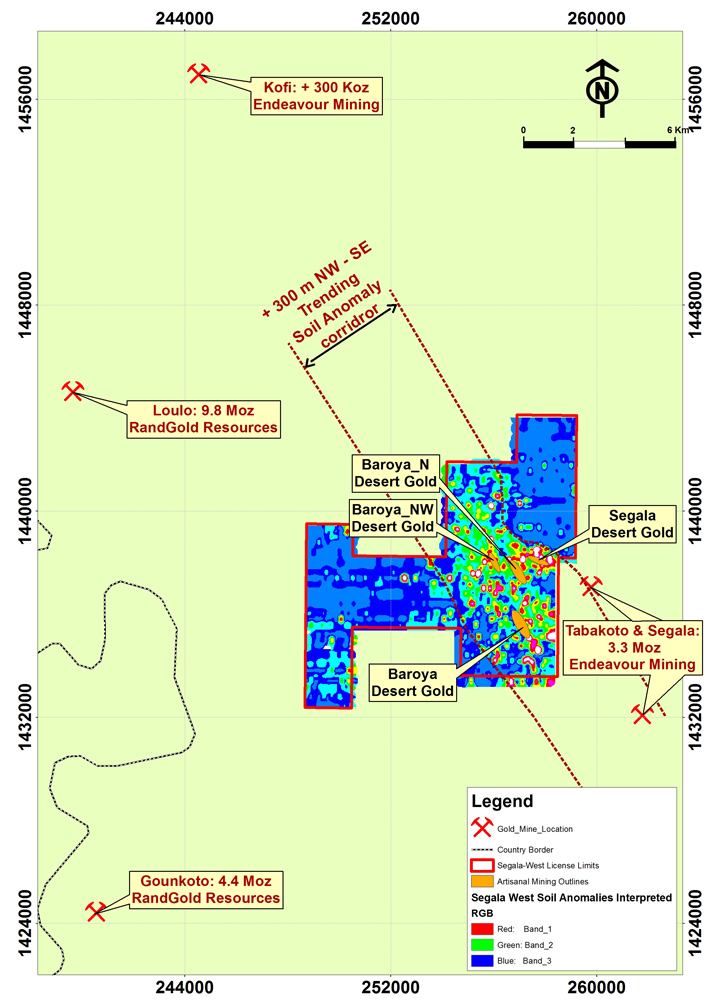 The work program will be conducted in two phases starting with 1,500 meters of DD aiming to better define the geology and the structural controls of the mineralisation followed by 3,600 meters of RC to deliver an initial inferred resource base. 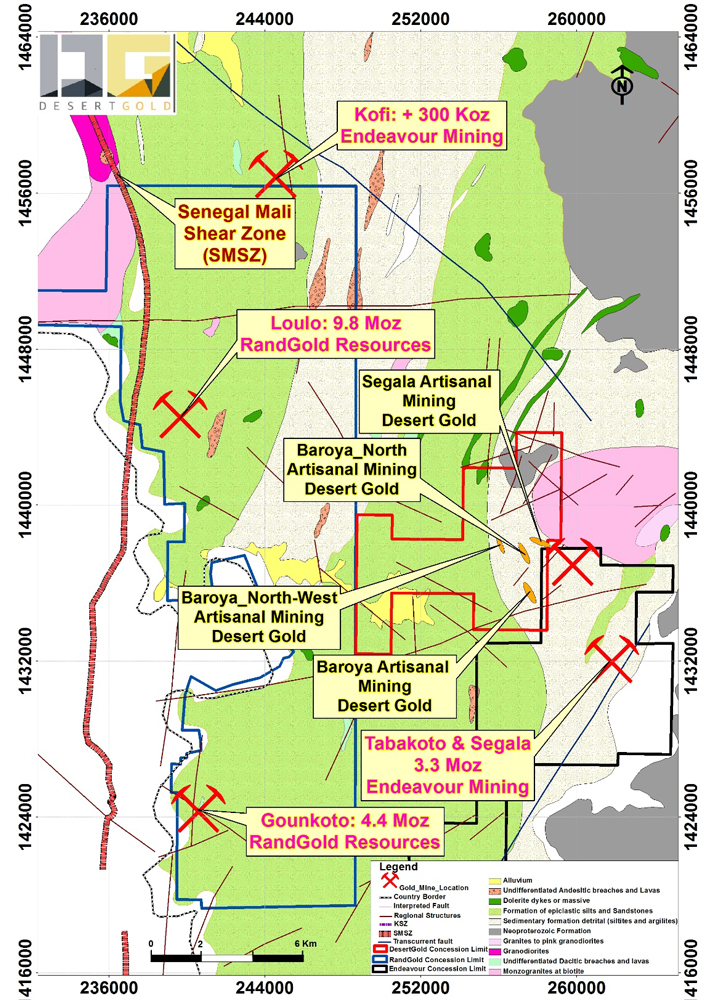 Located to the northeast and close to the village of Baroya. Baroya has more than 450 meters of strike length and 50 meters of width. The area is active with more than 200 local artisanal miners. Two holes totalling 400 metres of Diamond drilling are planned to better defined the geology and the structural control of the mineralisation. RC drilling consisting of 9 holes for 820 meters on 50 meters grid spacing will be used in order to generate initial inferred resources over the target.

Located 1.7km to the north of Baroya, Baroya North has more than 700m strike length. Encouraging results were reported from the rock sampling that demonstrates the potential for mineralised structure over the target. 2 holes totalling 400 metres of DD are planned to better defined the geology and the structure control of the mineralisation. Follow up RC drilling will contribute to an improvement in data density needed for initial resource estimation.

With more than 350 strike length, it is located at 800m to the east of Baroya north and appears to be the extension of the structure of the Segala gold mine corridor currently in production by Endeavour Mining. Encouraging results were reported from the pit mapping and rock-sampling program conducted in April of this year and demonstrate the high potential for a significant target. A drilling program consisting of two diamond holes for 450 meters and 5 RC holes for 550 meters is proposed to rapidly assess the potential endowment of the target.

With more than 400m strike length, this site is located 1km to the west of the Baroya North site. Local artisanal miners recently discovered this site and it has quickly grown over the last 6 months. Promising mineralisation with visible gold was reported from the pit mapping and rock-sampling program completed in June of this year. A drilling program consisting of 1 DD hole for 150 meters and 6 RC holes for 600 meters is proposed to define an initial inferred resource and get a better understanding of the structural controls.

This will focus on extension of the Baroya north target where TransAfrika Resources completed first pass RC drilling. Initial review and interpretation of this drilling has showed relatively shallow, high grade intercepts. However, the drilling azimuth used during the program remains questionable with no mapping and structure support.

Conceptual drilling will consist of:

3 RC holes for 360 meters will test the along strike north extension 100 meters of the mineralisation intersected by TransAfrika. 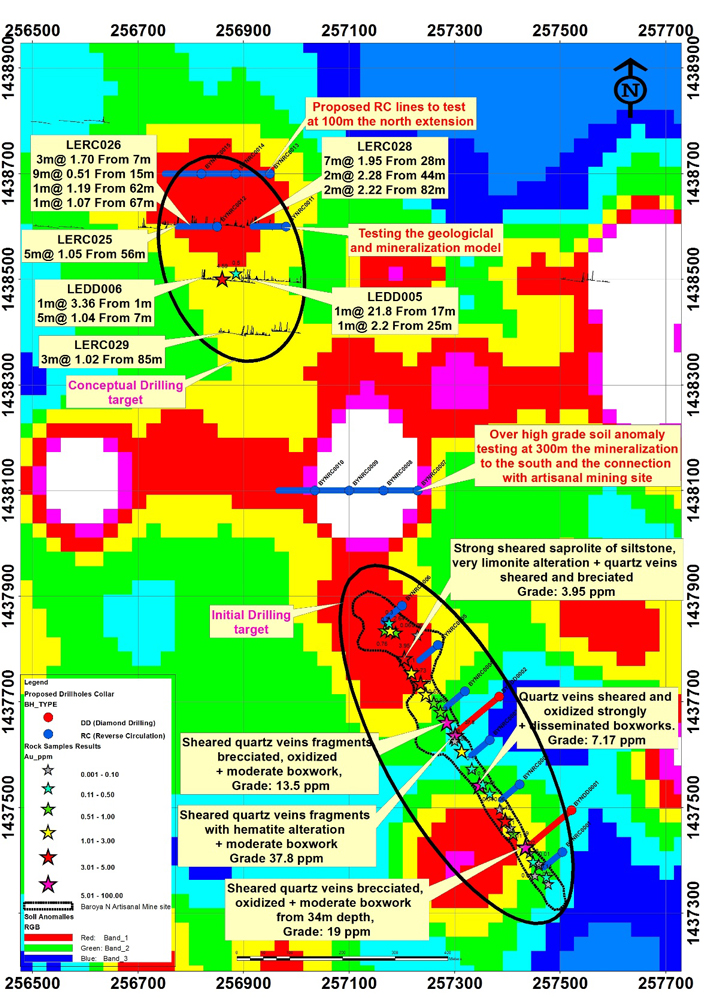 This note was reviewed by Dr. Luc Antoine who is a director of the Company and is registered as a Member of the Geological Society of South Africa (MGSSA 967397). He approves the scientific and technical disclosure in the news release and has the necessary experience relevant to the style of mineralization and types of deposits under consideration and to the activity that he is undertaking to qualify as a Qualified Person as defined in the National Instrument 43-101.