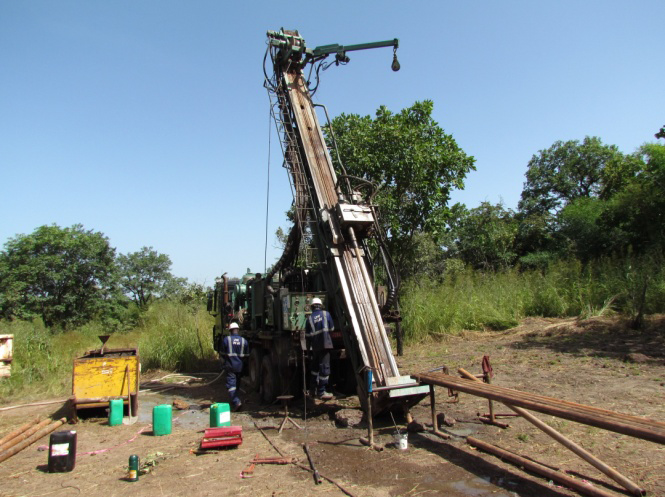 Desert Gold Ventures Inc. (“Desert Gold” or “the Company”) (TSX VENTURE:DAU) is pleased to announce the results of a preliminary economic assessment (“PEA”) of its proposed Barani East Gold Mine situated in Western Mali.

Desert Gold is developing the Farabantourou permit in Western Mali. The company has identified 6 mineralised zones and intends to develop its first mine at the Barani East prospect area (“Barani East Project”). Extensive drilling, metallurgical analysis, plant and mine design has been undertaken. The Barani East Project is situated some 100km south of the town of Kayes. The producing Sadiola Hill Gold Mine is located 40km to the north of Barani and Randgold’s Loulo Gold Mine is located 52km to the south.

On the basis of the capital and operating cost estimates, together with plant delivered grades and recoveries, a Discounted Cash Flow (“DCF”) analysis has indicated that the planned 40ktpm ore production operation is financially attractive. Current Net Present Value (“NPV”) calculations at a 5.34% per annum real discount rate, shows that the proposed mine can generate a pre-tax and after tax NPV of some US$15.0 million, net of the initial US$8.7 million capital expenditure. These amounts are expressed in mid 2014 money terms. This estimate is based on initial 65% total gold recovery in the processing plant. The DCF Analysis indicates that until revenues are generated from saleable gold, the peak funding requirement is around US$9.8 million. This amount caters for the initial capital of US$ 8.69 million and a further US$1.1 million for operating costs, principally spent on overburden removal and initial pit establishment, during plant construction.

At the Farabantourou Permit Area the Senegal Mali Fault Zone (“SMFZ”) cuts across the tenement and the mineralisation styles within the permit boundary are consistent with the regional geological setting. Six separate zones of mineralisation (1 mining target and 5 exploration targets) have been identified within the permit boundary. While shallow exploration drilling was conducted on all six prospects, the company focused on delimiting an exploitable Mineral Resource at Barani East.

The Barani East Project has been comprehensively explored and geologically modelled during the drilling programme. The ore body is tabular in shape with a northeast strike and steeply dipping between 45 and 60 degrees to the south-east. The gold mineralization is associated with quartz haematite rocks and kaolinite veins hosted in carbonate-rich siltstone and shale. The thickness of the mineralised zone varies between 4.5 m and 15 m in width. Gold mineralization extends from surface and is open at depth. Gold mineralisation has been tested to a depth of 120 m.

The Mineral Resource for the Project area, was calculated in compliance with the specifications and recommendations as embodied in the Standards of Disclosure for Mineral Projects as set out by the Canadian Code for reporting of Resources and Reserves - National Instrument 43-101 (Standards of Disclosure for Mineral Projects) and the resultant Mineral Resource Statement has been approved by the Qualified Person for public disclosure.

Following the successful geological drilling programme of the Project area, a very successful gold deportment study was carried out at SGS South Africa (“SGS”). This metallurgical study showed the ore to have excellent gold recovery potential which can be achieved under basic processing conditions. Following the SGS work, further bulk metallurgical test work was undertaken on a large bulk sample by Peacocke, Simpson & Associates (Pty) Ltd (“Peacocke& Simpson”). This work resulted in the design of a staged approach to the development of the processing facility. The first phase will include a scrubber with crushing facilities to allow for the treatment of any harder rock fractions and gravity concentration for the recovery of smeltable gold. Gold associated with heavy minerals will also be recovered to a secondary concentrate, by means of a continuous gravity concentrator and possibly a spiral concentrator module. Total gold recovery will be approximately 65%, with approximately 40% as free gold, and the remaining 25% as eluted gold. The erection of the plant will be of a short duration to build (estimated 18 to 24 weeks), and fast to commission (estimated 10 to 15 working days). An isometric drawing of the proposed plant is shown below. 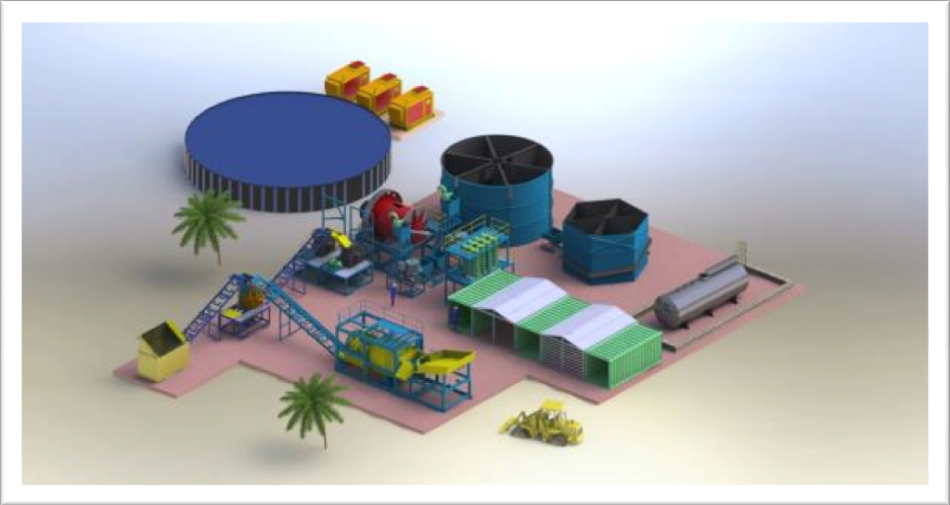 The geological study found the mineralized material and waste to be deeply weathered. For this reason, it has been assumed that mining will require no blasting and will be undertaken by “free digging” with a standard excavator, and conventional trucking to the nearby processing plant. The mining function is planned to be undertaken through a contractor with a local presence and capacity to operate and maintain his own machinery. It is also proposed that the mining contractor will be used to construct the tailings impoundment facility as well as the roads on and around the mine and to all other potentially mineralised zones.

Minxcon Projects (“Minxcon”) based in Gauteng South Africa, were tasked with designing, scheduling and costing the proposed pit layout. Ore and waste will be extracted by means of a large open pit mining operation. The final pit geometry on surface will measure some 900m on strike and around 450m in width. Final pit depth will be around 215m below surface. Both ore and waste to the final pit depth will consist of gravels and soils. As such, no drilling and blasting is envisaged to this depth. Therefore a “free dig” mining operation is expected and to be confirmed with further studies. If necessary, low grade stockpiles can be established and treated at a later stage where mineralization is encountered outside the defined ore body.

Mining will commence simultaneously with plant erection. Total refined ounces over the 45 month mining duration is estimated at 63 433 oz of gold.

The initial Capital Estimate to establish the mine, supply and erect 40 000 tonnes per month (“tpm”) processing facility, as well as the limited infrastructure to operate the mine will cost US$7.5 million in mid 2014 money terms. This is inclusive of a 15% contingency allowance for mining and 10% for the plant. These Capital Estimates were made by Minxcon.

Operational Costs have been estimated from first principles by Minxcon and compare very favourably with other operating open pit mines of similar size in Africa. The table below shows a breakdown of typical steady state monthly Operating Cost Estimates for the mining operations and processing facility. Operating Cost Estimates are expressed in mid 2014 money terms.

The Pit Optimisation Study was confined to a mineralized zone of 400m on strike to a depth of 250m. There is every reason to believe that gold mineralisation continues at depth and may possibly extend further on strike. Upside potential exists in the lateral extension of the strike of the current pit.

This lateral extension will be targeted for further exploration once the mine is established.

The adjacent Barani Prospect is located approximately 1km due west from the Project area. This prospect area contains a mineralised zone, but no Mineral Resource has been defined. Early drilling has revealed mineralization in this target area. Should the mineralization prove to be economical the material can be very easily be loaded and hauled to the Barani East Plant.

Further investigation and analysis shows that with further capital expenditure, additional value could be generated by the re-treatment of the tailings stream from the primary concentrator facility. The tailings are estimated to contain some 34 000 oz of gold. A substantial amount of these gold tailings losses can be recovered by plant upgrades and by installing both milling circuit and further bulk, low cost, high intensity leach methods. Test work and analysis is continuing in this regard.

For further information Please visit our website www.desertgold.ca or refer to the technical report which will be available on www.SEDAR.com under the company’s profile.

Statements in this presentation, other than historical facts, that address exploration activities and mining potential are forward-looking statements. Although Desert Gold Ventures Inc. believes that the expectations expressed in such forward–looking statements are based on reasonable assumptions, such statements should not in any way be construed as guarantees of future performance. Factors that could cause developments to differ materially from those expressed include: exploration results; technical analysis; and lack of availability to the company of necessary capital to progress its projects further. The company is subject to specific risks inherent in the exploration and mining business and general economic and business conditions.