The ~400 km2 SMSZ Project is both named after, and, overlies a 38 km section of the Senegal Mali Shear Zone (see Figure 1), which is related to 5 large mines located both to the north and south, along strike, including B2 Gold’s Fekola Mine, Barrick’s Gounkoto and Loulo Mines and AngloGold Ashanti/Iamgold’s (now Allied Gold’s) Sadiola and Yatela Mines[1]. To the Company’s knowledge, the SMSZ Project is the largest, contiguous, non-producer land package over this very prospective structural feature. Management considers exploration targets within 5 km of the Senegal Mali Shear Zone to be high priority.

The Company carried out a 74-hole drill program during the period from late December to early January. The program consisted of 72 AC holes totalling 3,307 meters and 2 RC holes totalling 200 metres. These holes were designed to test five previously untested target areas, with three of the five areas returning new drill intercepts and two of the areas returning significant drill intercepts that will be followed up with additional holes. Intercept details are provided in a table at the end of the news release.

A summary of the drill highlights* are as follows (see Figure 2):

Jared Scharf, Desert Gold’s CEO comments “I am quite pleased with these new results. Our auger and follow-up drill programs are proving to be highly effective at making new, quality gold discoveries where no one else has looked or tested before. This cannot be over emphasized as approximately 30% of the SMSZ property, and especially proximal to the Senegal Mali Shear Zone, lies under relatively shallow laterite and overburden cover. These results again support our exploration concept that property, and in particular Desert Gold’s, aligned along this regional scale structure, is one of the world’s best places to explore for new, potentially economic gold discoveries.” 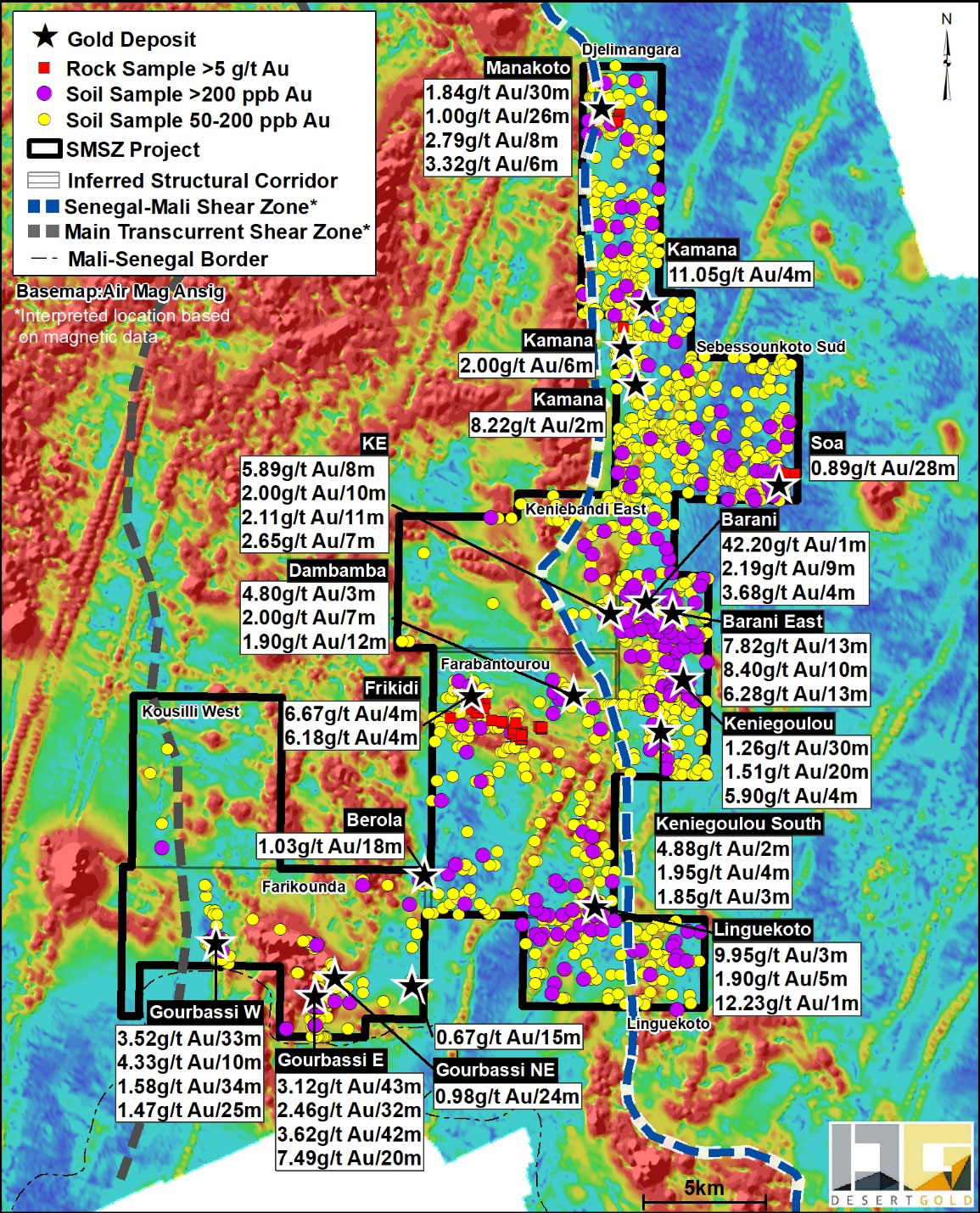 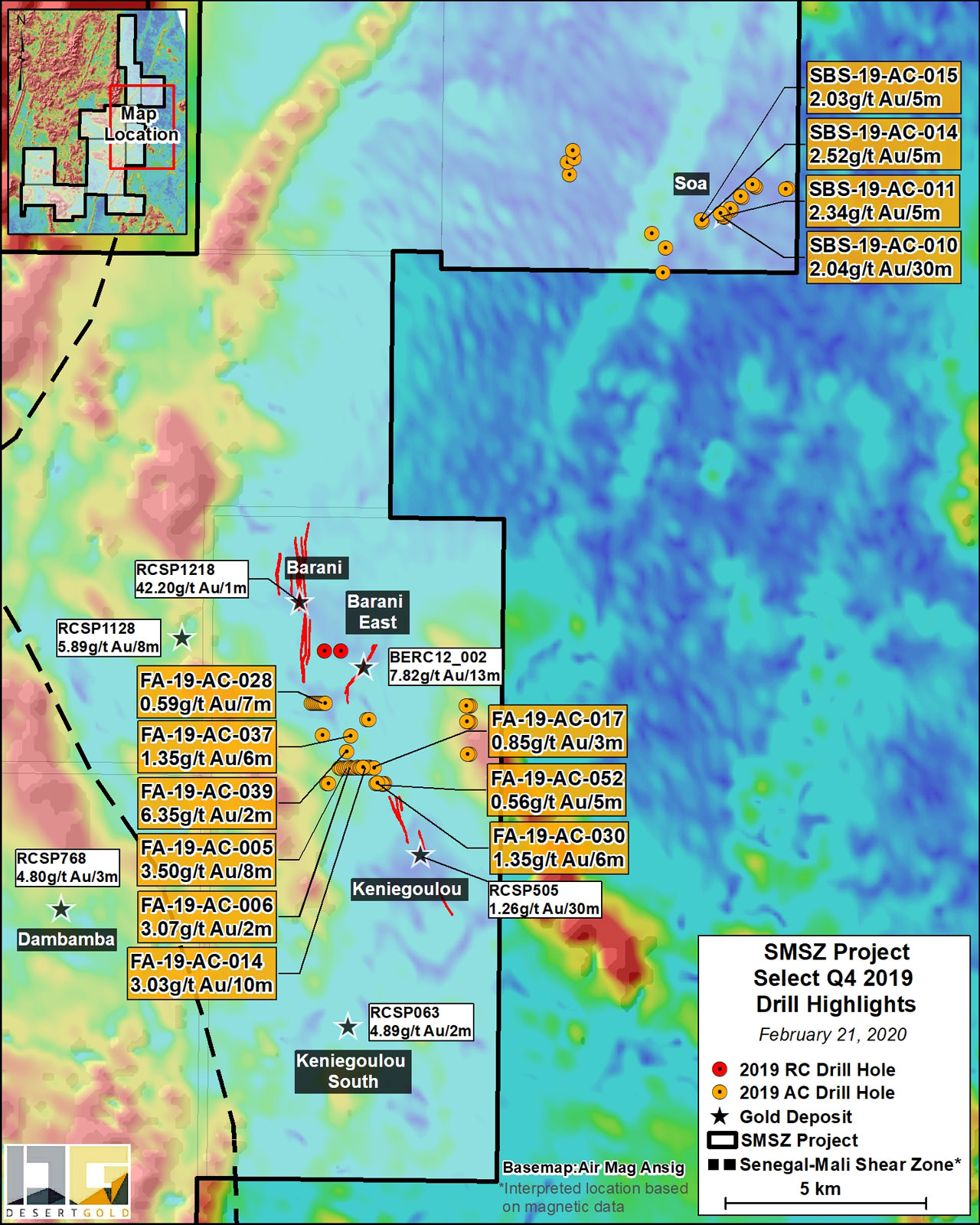 The phase 1 drill program is was carried out to test drill targets that were developed in exploration target areas 3, 16, 41, 46 and 56 (see locations in Desert Gold News Release dated Jan 29, 2020). Of these five target areas, three, target areas 16, 41 and 56, returned new, significant intercepts. A summary of the target areas follows, and detailed assay composites are presented in Table 1, at the end of the release. Most holes intersected enough gold mineralization to validate the drill target. However, only gold intercepts using a 0.5 g/t gold cut-off are presented here-in. Gold values > 0.1 g/t, which is a much lower cut-off, are used as an exploration tool, as an indication of gold ‘alteration’ for tracking mineralized trends and weaker parts of mineralized gold systems.

A total of eight AC holes comprising 356 metres, were drilled to test a northerly striking Au-in-soil anomaly that, at its southern end, is associated with a tourmaline- and sphene-bearing albite granite dyke. Previous work along this trend returned 1.34 g/t gold over 4 metres at the end of a hole (see Figure 3). Six holes drilled north of the historic intercepts did not return any significant gold values. However, two holes, drilled 200 metres to the south, returned 2.37 g/t gold over 1 metre and 0.71 g/t gold over 1 metre. While narrow, this trend and intercepts, line up with target area 59, which is an induced polarization chargeability anomaly.

Target area 16 or Soa area (see Figure 2), lies northeast, along strike of the same structure or structural trend that hosts the Barani East deposit (skarn-like, sulphide replacement, carbonate-hosted gold deposit with intercepts to 7.82 g/t gold over 13 metres). Historic work over the Soa area had returned a trench value of 0.89 g/t gold over 28 metres. Recent mapping located 17 small to medium-sized artisanal open pits to 100 metres long by 15-15 metres wide by 5 to 10 metres deep in an area approximately 2,000 metres by 500 metres in size. These pits are oriented in at least three directions, northerly-, northeast- and west-northwest-trending. Deeper pits appear to be located close to the structural intersections. The area is underlain by metasedimentary rocks.

A total of 18 AC holes comprising 896 metres were drilled as a first pass to test some of the potential targets in this area. Of these holes, 4 returned significant gold values with a best intercept of 2.04 g/t gold over 30 metres, with the hole ending in mineralization. This hole was drilled perpendicular to and under a trench that had returned 0.89 g/t gold over 28 metres, which appears to have been excavated semi-parallel to the structures noted in the artisanal pit. However, with multiple structural directions observed in the artisanal pit, estimated true widths of the intercepts in this area, are not clear. Another hole, drilled en-echelon to the west and 21 metres to the north, intersected 2.34 g/t gold over 5 metres, at the end of the hole.

The other two holes anomalous holes, which returned 2.03 g/t gold and 2.52 g/t gold, both over 5 metres, tested proximal to another artisanal open pit, area located 275 metres to the west. It is not clear if these two mineralized areas are connected.

Additional geological mapping and/or geophysical surveys are required to determine the trend of the mineralization that was intersected by the drilling and how best to follow up on these promising early results.

Target area 41 (see Figure 3), is a series of five, interpreted, gold-in auger anomalous trends, with values to 1,840 ppb gold, that lie over the intersection zone between the northeast-trending Barani East Zone and the north-northwest trending Barani and Keniegoulou gold Zones. One of the gold-in-auger anomalies is approximately 150 metres wide. This area was never adequately tested as it lies under laterite cover. There is good correlation with drilled mineralization and auger anomalies in this area with an intercept of 1.97 g/t gold over 7 metres (~90% true width) associated with an auger-in-soil anomaly of 1,020 ppb gold. A total of 50 AC holes, totalling 2,211 metres, were drilled to test the gold-in-auger anomalies.

The next steps will be to trace these intercepts along strike. From work over the Barani Zone, the mineralization appears to have a horizontal plunge and a moderate to steep east dip. What this means, is that the zone is best traced along strike, drilling at or near the same vertical level from east to west. However, plunge at the Barani East Zone is shallow to moderate to the south, with a moderate-east-dip and thus would require a different positioning of the drill to trace this style mineralization. Mineralized trends #2 and #3, appear to be related more to the addition of sulphides compared to quartz veins controlling the gold mineralization, which is more typical of the Barani East Zone.

Four AC holes, totalling 200 metres, where drilled to test this 400-metre by 250-metre artisanal mining area. Since there was no clearly defined trends in the artisanal mining areas, it was hoped that this area represented a bulk mining type of target. Unfortunately, no significant results were returned from the area and as such, it is not clear what the local miners are mining. A post drill review of the area will be carried out to determine next steps.

Two RC holes totalling 200 metres were drilled to test the near-surface expression of a 3,200-metre long IP chargeability anomaly. This area was chosen as the first place to start to evaluate this target as it was in the pressure-shadow of a large granodiorite intrusion and halfway between the Barani and Barani East Zones. Soil sampling in this dominantly, laterite-covered area, returned modest gold-in-soil anomalies with mapping noting areas of quartz veining and hematite alteration. The best results were returned from the westernmost of the two holes, which returned 1.03 g/t gold over 2 metres. Additional work will need to be completed along this trend, as the strongest part of the geophysical anomaly is deeper than tested. As well, it appears that the Target Area 41’s, #2 trend, is semi-parallel to this geophysical anomaly. Recent drilling returned good results along Target Area 41, trend #2. 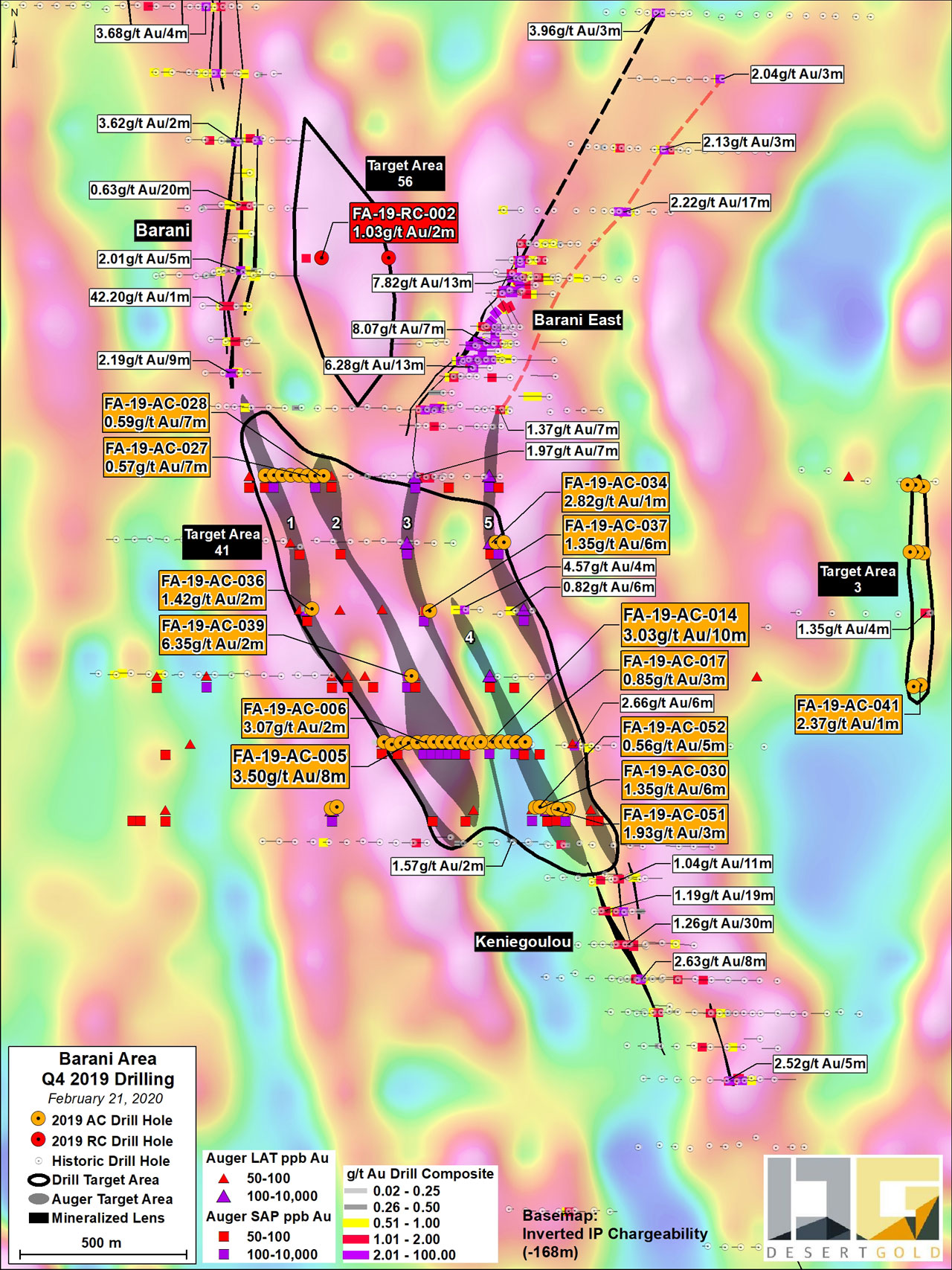 At Barani East and Gourbassi East and West, additional drilling using AC, RC and Core is planned both to depth and along strike of known zones with a goal to delineate mineral resources. The Barani East Zone, which is controlled by a northeast-trending structure, appears to plunge moderately to shallowly to the southwest; new drilling will target down plunge and along strike of the known lenses, with a goal to extend known lenses and to discover additional lenses. Recent work at the Barani, Keniegoulou and Manakoto Zones (see Figure 1 for locations), suggests that mineralization has a flat plunge, which would support the planned testing of high-grade intercepts, along strike, at or about the same vertical level.

Wide-spaced auger lines will initially test for gold enriched target areas that are covered by laterite. If anomalous gold values are delineated, then more systematic auger drilling will be carried out to better define the gold anomalies prior to first pass testing by AC drilling. Target areas that have been validated by existing soil surveys and/or geological mapping, will be tested by AC drilling if the rocks are weathered (saprolitic) and RC drilling if the rocks are fresh.

Geological mapping has been on-going since late November 2019 and is expected to continue through to July 2020.

For AC and RC drilling, all individual samples represent approximately one-meter in length of rock chips homogenized and riffle-split to an approximately 2kg sub-samples which were sent by truck from the project site, for preparation and gold assaying at the SGS laboratories in Bamako, Mali.

Each sample (AC, and RC) is fire-assayed for gold by SGS laboratories in Bamako using Au-FAA505 method, which is a 50g fire assay fusion with AAS instrument finish. In addition to SGS’s own QA/QC (Quality Assurance/Quality Control) program, Desert Gold’s internal quality control and quality assurance procedures included the use of certified standards (1 :20), sample duplicates (1 :20) and blanks (1 :20). Sample batches that fail QAQC review, especially those with significant gold intercepts, are re-assayed with the insertion of new standards.

The non-core Segala West exploration concession 7-year term has expired. Desert Gold’s application for a new license was not granted.

Greg Isenor, a Director of Desert Gold, has chosen to resign so that he can focus on Roscan Gold Corporation, another TSX-V junior explorer that is also active in Western Mali. Desert Gold wishes Mr. Isenor the best of luck with Roscan’s exploration efforts and thanks him for this support and contributions to Desert Gold.

Desert Gold Ventures Inc. is a gold exploration and development company that holds 2 gold exploration projects in Western Mali (SMSZ and Djimbala) and its Rutare gold project in central Rwanda. The Company’s current focus is its 391 km2 SMSZ Project that spans approximately 38 km of the prolific Senegal Mali Shear Zone.